A gala celebration was held on April 28, 2019, to commemorate the 50th anniversary of the AAUW Reston-Herndon Area Branch at  Wildfire Restaurant (Tysons Galleria, VA) with a wonderful luncheon and program. 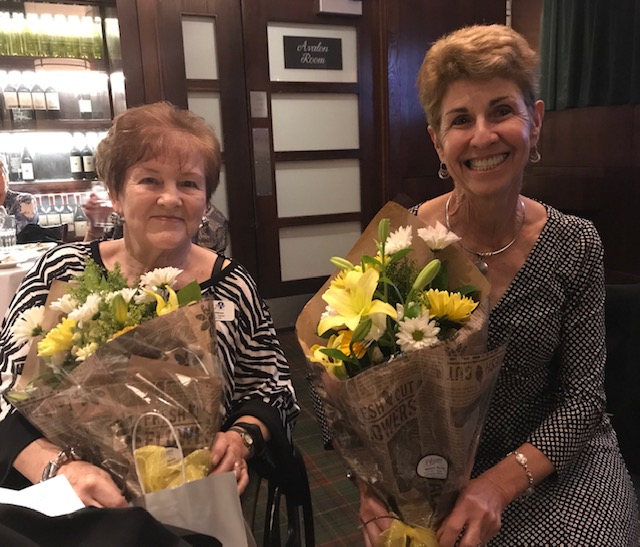 (right in photo) and Marion Stillson (left) for their the tireless efforts which resulted in a delightful afternoon of reconnecting and reminiscing with present and past members. Judi and Marion are former branch presidents, Judi served twice, and Marion was also our AAUW-VA state president and served in several capacities at the national level.

THE ANNIVERSARY LUNCHEON was held on Sunday April 28, 2019, from 12:00 – 3:30 p.m. After a fun-filled hour of socializing, perusing  the 13 “time-travel” displays created for this event and reconnecting with friends, Judi Ornoff, event co-chair, opened the program with a warm welcome. Judi recognized the many past-presidents and guests in attendance. President Dianne Mero brought greetings from the branch and shared a personal commendation message and a Certificate of Honor from AAUW CEO Kim Churches. Leslie Tourigny, AAUW-VA state Co-president, presented a delightful congratulatory message from the State. Dianne gave a heartfelt toast to the branch and its continued success. After a delicious family style luncheon, Marion Stillson, co-chair, introduced Keynote Speaker, Senator Jennifer Boysko, who gave an inspiring message about empowering women and how this issue has touched her personally. Dessert was served accompanied by a very interesting and entertaining slide show covering the 50 years of the branch produced by Judi Ornoff. Marion Stillson introduced two “founding mothers” of our branch, Gail Osberg and Barbara Naef,  who shared reminiscences about the earliest days of the branch. Dianne closed the program with a look ahead and expressed sincere appreciation on behalf of the branch to all who made such a wonderful afternoon possible. An “All Presidents” photo was taken by branch member John Lovaas and Programs VP, Judy Skirbunt, They also took numerous photos during the event, as did several other guests. (To view some of the pictures, please see the “Photo Album” tab under “About Us” on this Website Homepage.)

BRANCH HISTORY – Although we chose a date in April to celebrate, hoping for nice weather with no cancellations, the AAUW Reston Branch was officially chartered on February 14,1969. The description of the establishment of the branch can be found in branch records:
“In October of 1968, a group of interested women had first indicated their intent to form a branch in this area. Almost immediately after chartering, the first president had to resign due to ill health , so Barbara Naef became our Acting President until new elections  [were held] at the business meeting in March 1970, at which time Dr. Jo Bloom was elected. Margaret Keaney succeeded her in 1971. Although the branch grew  slowly, it was committed to on-going concerns of AAUW from its inception. Only three month after chartering, we sponsored our first used book sale for the EFP Fund [Education Foundation Programs] at the Reston Festival.”
(Excerpt from “Reston, VA. Branch – Our First Ten Years” by Judy Bates, Martha Nagle and Gail Osberg, pub 1979).

1969 BRANCH CHARTER – Below is a copy of the original charter approved approved by the new officers: 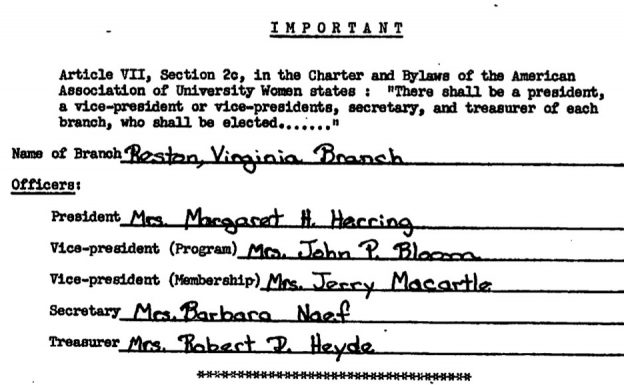 50 YEARS OF HIGHLIGHTS BY THE DECADE – Gail Osberg, currently the Reston-Herndon Area Branch member with the most tenure, joined the AAUW Reston Branch on July 1, 1971. Gail, a retired librarian, researched and gathered a list of the branch “highlights,” by decade as one of the 50th anniversary activities. The product, “50 Years of Highlights, by the Decade,” was made into an interesting and informative display by Marion Stillson for the luncheon and is reproduced below:

RESTON-HERNDON AAUW — 50 YEARS IN THE MAKING