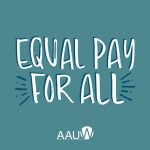 The American Association of University Women believes that pay equity and equal employment opportunity are matters of simple fairness. AAUW is a leader in the fight to end wage discrimination and open doors for women in the workplace. Fair pay and economic opportunities are critical issues for women, many of whom continue to struggle with economic insecurity and wage discrimination.

Despite civil rights laws and advancements in women’s economic status, workplace discrimination still persists. Typically, women who work full
time take home about 80 cents for every dollar a full-time male worker earns. Over a career (defined as 47 years), women’s total estimated earnings loss compared with men is $700,000 for a high school graduate, $1.2 million for a college graduate, and $2 million for a professional school graduate.

Research indicates that the gender pay gap develops very early in women’s careers. In Graduating to a Pay Gap: The Earnings of Women and Men One Year after College Graduation, AAUW found that just one year after college graduation, women were paid 82 percent of what men were paid. Controlling for factors known to affect earnings, such as education and training, marital status, and hours worked, research finds that college-educated women still earn 7 percent less than men just one year out of college.

A pay gap also persists across all racial and ethnic groups, and is found in every state and virtually every occupation. The most recent edition of AAUW’s The Simple Truth about the Gender Pay Gap found that among full-time workers in 2017, African American women and Latinas make, respectively, 61 and 53 cents on the dollar as compared to non-Hispanic, white men, demonstrating that women of color experience wider pay gaps. The overall pay gap has only decreased by a nickel during the 21st century and, unless action is taken, the pay gap between men’s and women’s earnings will not close until 2106.

Pay inequality isn’t just a women’s issue; it’s a family and a national economic issue. Recent research has found that 64 percent of mothers are the primary, sole, or co-breadwinners of their families. That means families are increasingly relying on women’s wages to make ends meet. Pay discrimination also limits women’s choices and has long-lasting consequences. It impairs their ability to buy homes and pay for a college education and limits their total lifetime earnings, thereby reducing their retirement savings and benefits. Equal pay is essential to ensuring families’ long-term economic security.

Between 2014 and 2016, the executive branch took critical action to provide new tools to fight the pay gap. Because of these actions, federal contractors are now prohibited from retaliating against employees who talk about their salary with their coworkers. Other protections for workers, like a federal pay data collection designed to identify trends in pay discrimination based on gender, race, and ethnicity, have been delayed by the current administration. To continue to close the gender pay gap, protections must be advanced, not stopped or delayed, and the executive branch should take additional action to ensure adequate enforcement of all civil rights laws through sufficient funding and staffing of civil rights enforcement agencies.

In order to ensure these types of protections and others, Congress must take action to codify new tools into law.

Paycheck Fairness Act: This important bill updates and strengthens the Equal Pay Act of 1963 to ensure that it can provide effective protection against sex-based pay discrimination. The Paycheck Fairness Act bars retaliation against workers who voluntarily discuss or disclose their wages. It closes loopholes that have allowed employers to pay women less than men for the same work without a business necessity that is related to the job. It also ensures women can receive the same robust remedies for sex-based pay discrimination that are currently available to those subjected to discrimination based on race and ethnicity. This bill prohibits employers from relying on salary history in determining future pay so that pay discrimination doesn’t follow workers from job to job. And it also provides technical assistance to businesses, requires pay data collection, and supports salary negotiation skills training programs to give workers the tools to advocate for higher wages. The bill was passed in the House in 2019 but is stalled in the Senate.  AAUW continues to advocate for the passage of this critical legislation into law and Reston-Herndon members of AAUW Lobby Corps are active in this effort.